America.  It is common place to hear how divided America has become, and yet, on this 16th anniversary of 9/11/01 I cannot help but see that America stands, united.

9/11/01-  I do not think Americans will ever forget the events of 9/11/2001 nor will they forget what all came to fruition in the days, weeks, and years the followed.  A war in Afghanistan, A war in Iraq, the fall of the Taliban, the rise of ISIS.  However what many Americans have forgotten is the support, the unity, and the patriotism that followed. 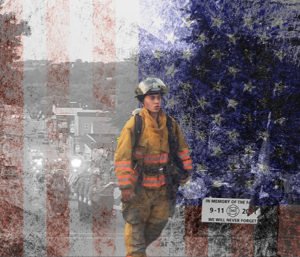 remember all those who passed away on 9/11/01.  Her son, dressed in full firefighting garb, was walking in the procession up the main street of this town.  It struck me.  America has not forgotten. America has not divided.

9/11/17- Texas is in a state of emergency after Hurricane Harvey brought heavy rain, floods, high winds, tornados to much of the Texan coast.  Flordia is in a state of emergency after Hurricane Irma walked up the pan handle bringing a huge storm surge, high winds, tornados, and heavy rain.  Millions of people are displaced, hundreds of thousands of homes are destroyed and millions are without power, clean clothing, and or safe drinking water.  America is suffering devastation and destruction rarely if ever before seen on American soil.  However, millions, tens of millions, hundreds of millions, nay-billions of dollars have been donated to aid  those affected by the hurricanes.  That’s right, people from all across America, every state, and every level of income are donating money, time, and supplies.

The amount of generosity and support that has sprung up across America is astonishing, and the generosity is not limited to or by race, age, income level, or religion.  This is the truest picture of America.  You may hear accounts of isolated incidents of division and bigotry, but I think the last few weeks have proved, undeniably, that Americans have each other’s backs.

On the 16th anniversary of 9/11/01, I can think of no better tribute to those that fell, than the amazing outpouring of generosity, remembrance, and respect we continue to see by Americans.

From all of us at AET Systems, Inc., HAPPY PATRIOT DAY