Q:  Are WAGNER Lubricants from Germany available in the United States?

A:  Yes, WAGNER Lubricants are available in the United States under the brand Air-Tec High Class Lubricants

Q: Are the Air-Tec Lubricants the same high quality lubricants that WAGNER provides throughout Europe? 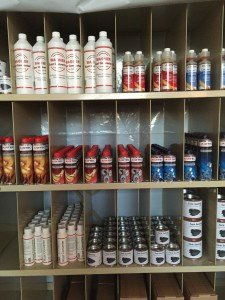 A: Yes, all Air-Tec Lubricants are made in Germany by WAGNER Industries, and are the same products available in Europe

Q:  Why aren’t the oils under the WAGNER Brand in the U.S.?

A:  We would have like to bring the WAGNER Brand to the U.S; however, with Wagner Shell having done such heavy branding the U.S there were concerns about legal issues and brand distinction.  Therefore we chose to bring the same high quality WAGNER Products to the U.S. under the brand of Air-Tec Lubricants.  Air-Tec Emissions Reduction Systems is a company and product within WAGNER.  As AET Systems, Inc. was already distributing the Air-Tec System we decided to brand the incoming oil and additives under Air-Tec.

Here is a little bit about the WAGNER Products that are currently for sale in the USA:

WAGNER Micro-Ceramic Additive came to North America under the brand name of Air-Tec HIGH-CLASS Micro-Ceramic.  It is the same exact product offered in Germany, just with a new name and label, so you can expect all of the same great results.

WAGNER Automotive Additive was another of the first products to make the trek across the ocean and became Air-Tec HIGH-CLASS Automotive.  Used in automatic transmissions as well as engine and gear oils, the Automotive additive is a great alternative when the Nano-particulate ceramic cannot be used.

WAGNER Bactofin, the top gasoline stabilizer and additive in the German Vintage (veteran) Car Market became Air-Tec HIGH-CLASS Octane FS1 in the U.S. Market.  It is a multifunction additive that provides wear protection above and beyond a normal stabilizer, while stabilizing your gasoline for up to 1 year!

WAGNER Diesel Additive, a standard in many German fleet vehicles became rebranded in the U.S. as Air-Tec HIGH-CLASS Cetane CS1.  Again, a multi-function additive it stabilizes diesel for up to 1 year, eliminating bacteria, preventing corrosion, and improving the fuel Cetane levels!